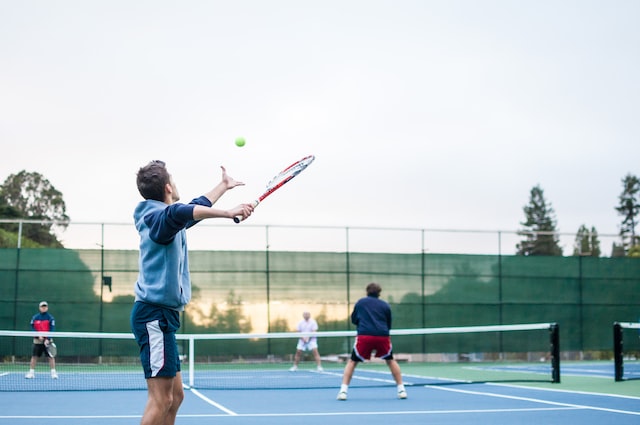 If you’re looking for a fun, fast-paced sport to play that can be enjoyed by people of all ages and skill levels, look no further than pickleball. This increasingly popular game is played on a badminton-sized court with a paddle and plastic ball. No wonder it’s often described as a cross between badminton, ping pong, and tennis!

In this article, we’ll give you tips on getting started playing pickleball. First, we’ll share the history of the game and how it got its quirky name. Then, we’ll tell you where to find a court and what equipment you need. Finally, we’ll give you a crash course on the basic rules of pickleball. By the end of this article, you’ll be ready to get out on the court and start playing!

What is Pickleball and Where Did it Come From?

Pickleball was invented in the 1960s by three dads looking for a summer activity their kids could enjoy. They came up with the game on Bainbridge Island, near Seattle, Washington. The original court was simply a badminton court with a volleyball net set up across it. And the name? That came from one of the inventor’s dogs, who loved to chase after the ball and paddle.

Where Can I Play Pickleball?

Nowadays, you can find pickleball courts all over the world. In the United States, there are estimated to be around 15,000 outdoor pickleball courts and 5,000 indoor ones. You can also play pickleball in your backyard or driveway- all you need is a net and a ball. You also have the option to have a pickleball court builder construct a court for you.

What Equipment Do I Need to Play Pickleball?

When playing pickleball, you also have to wear comfortable, non-marking shoes. Many people choose to wear sneakers or tennis shoes. You also want to make sure you’re wearing clothes that won’t restrict your movement.

What are The Basic Rules of Pickleball?

The object of pickleball is to score points by hitting the ball over the net and onto your opponent’s side of the court. The game is played with two or four players and can be singles or doubles. Each player starts on their side of the court.

The game begins with a serve. The server stands behind the baseline and hits the ball diagonally across the net, into the service zone of the other player. The receiving player must let the ball bounce once before returning it. After that, players can hit the ball in mid-air or after one bounce.

Players score points by hitting the ball into the other player’s court, making it difficult for them to return the ball. The first player or team to reach 11 points (with a two-point lead) wins the game.

Now that you know a little bit more about pickleball, it’s time to get out on the court and start playing! Remember, the best way to improve your skills is to practice and play as often as you can. Soon enough, you’ll be a pickleball pro!

How to Play Professional Pickleball?

If you think you have what it takes to play professional pickleball, you’re in luck! The International Pickleball Federation (IPF) is the governing body of the sport and oversees all professional tournaments.

To compete in a professional tournament, you must meet certain requirements. For example, you must be at least 18 years old and a member of the IPF. You must also have played in at least three tournaments that are sanctioned by the USAPA or IFP.

If you meet all of the requirements, you can then register for professional tournaments. The tournament director will place you in a division based on your skill level. From there, you’ll compete against other players in your division and try to advance to the next round.

The prize money for professional tournaments can vary depending on the size and location of the event. For example, the winner of the 2019 US Open Pickleball Championships took home $5,000. So if you think you have what it takes to be a pickleball champion, start practicing and sign up for your first tournament today!